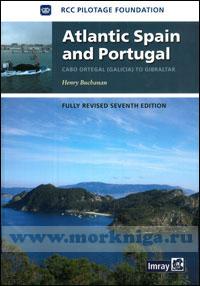 Foreword to 7th edition
In recent years I have sailed the full length of the coasts of Atlantic Spain and Portugal between Cabo Ortegal and Gibraltar, both southwards and northwards. On board we had a copy of the 6th edition of The RCC Pilotage Foundation Atlantic Spain and Portugal and it became a very well- thumbed reference and an invaluable companion. I join Henry Buchanan in thanking the originators and subsequent authors and editors who have built such a thoroughly useful pilot book.
In this fully revised 7th edition Henry Buchanan has used his own recent experience of cruising these coasts, together with a great deal of useful feedback sent in to the RCC Pilotage Foundation by fellow yachtsmen, to update and extend the information as much as possible. The RCC Pilotage Foundation is sincerely grateful to Henry for taking on the task of editing the whole of this edition, and to all the contributors who have sent in corrections, photographs and additional information.
The Atlantic swell is a very common concern when considering cruising this coastline. As is ever the case, those who do not have deadlines and who are prepared to be patient will be well-rewarded. Others may be lucky to grab a chance in a much shorter time frame. Either way, it is perfectly possible to enjoy favourable conditions whether heading south or north. The trick is to monitor swell forecasts as avidly as you monitor the winds, and to make shorter hops along the coast if patterns are unstable. Every stop off provides something to enjoy. Don’t be tempted to pass it all by!
Coastal features do not usually change very much, but harbours and facilities often do. If you find anything which needs updating in this edition please do email us to let us know. An annual supplement will be produced each year after publication and will be available as a free download from both the Imray and RCC Pilotage Foundation websites. Click through to the Atlantic Spain and Portugal page of the pilot books section of the websites where you will find any mid-season updates or corrections and links to the annual supplement.
This meticulously updated 8th edition invites the cruising sailor to safely explore numerous exquisite locations, reassured by the author’s wealth of experience. The considerable expertise of the well-respected Henry Buchanan is the backbone of this publication. It is a no-nonsense book, rather than a humorous anecdotal compilation for the coffee table.

The familiar and accessible layout belies the attention given to updating navigational detail and support information. There is a logical division of the pilot into three distinct cruising areas with a cruiser-friendly layout to the sections within. Corrections and updates to earlier editions have been made throughout.

In an age when information is instantly at our fingertips, we may fall foul of anecdotal comment from unknown and unproven sources. The Pilotage Foundation uses tried and tested sources which are then cross-checked by experienced cruising sailors. This is most reassuring and allows for a more enjoyable cruise.

The less experienced visiting sailor will find this volume accessible and instructive. Well-positioned photos of overview and sea-level approaches complement the Imray plans. The seasoned navigator, seeking out the less frequented, will also be supported in the approach to places like Malpica and Islas Sisargas. He or she can learn from the experience of others regarding hazards such as the previously uncharted rocks at San Vincente del Mar or changed positions of tuna nets in the Algarve. The newly charted Aguina approaches in Galicia is a most welcome addition. I do favour a row up the totally unspoilt Rio Vascao, a tributary of the Algarve’s Guadiana, which deserves a mention. I am also enamoured of a 5m pool off the hotel used by Franco on Isla Toxa Grande, Ria de Arousa; tricky navigation but worth it.

Foreword to 8th edition
This 8th edition also assists in making the cruise more pleasant with information about visits ashore to tranquil nature reserves or lively fiestas. Also, we are given pertinent information on permits for protected areas and appropriate etiquette in marinas and Yacht Clubs.

In brief, study ATLANTIC SPAIN AND PORTUGAL (8th edition) before your cruise and then thumb through it as you go. It would be in poor judgement to cruise without and your experience will be enhanced immensely.