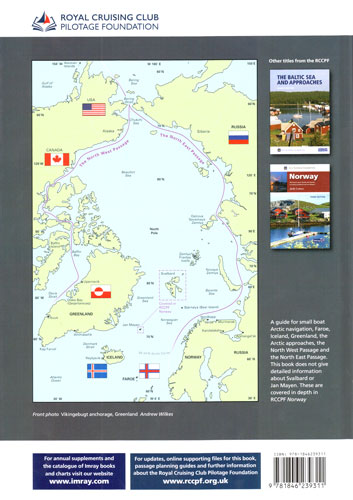 Издание на английском языке
This handbook from the RCC Pilotage Foundation, covers the Northwest and Northeast Passages through the Arctic Ocean as well as Faroe, Iceland and Greenland. Incorporating information collected on a number of voyages over recent years this work is an impressive resource which brings together experience and background data on a region that is not only in the news but increasingly accessible to cruising yachts.
Arctic and Northern Waters is in the same style as other PF pilots and is a practical cockpit reference as well as a source of inspiration for planning. This second edition contains revisions and additional information, some of which was previously published in the annual supplement. There are new photographs and harbour plans.
...’Thank you very much for this invaluable reference work! ... it's astonishing the amount of information in it - I wish that everyone who is going to the areas covered would have a copy of it! The extent of the work that went into it is amazing...’ Peter Semotiuk- Northwest Passage 'guru'
‘All the information required for Arctic navigation is here in one volume. A comprehensive and exceptionally well presented and illustrated book.’ OCC Flying Fish Magazine
‘For armchair voyagers, it’s a compelling volume that takes the reader into waters that few will travel- for those who go there this is essential reading.’ Irish Cruising Club Magazine
Of the first edition, ‘The reviewer cannot recommend this volume strongly enough to anyone intending to venture to these waters.' John Andrews, Cruising Association Magazine